I recently changed my iPhone lock screen to this poster by T.W. Addison: 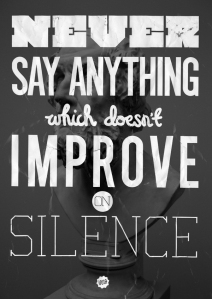 In the age of Twitter, I have grown so tired of quotes.  One scroll through the timeline and you can find a million of them to fit any situation you’d like.  They all eventually blend into one another and I just skim past them.

But this one, well, it skipped right past “speaking” to me and went straight to “screaming” at me.

To be honest, the last year has been pretty crappy.   The school year was anything but enjoyable, full of conflict, bullying, and annoyances.  We had friends and family diagnosed with serious illnesses, and we lost some truly incredible loved ones.  Life in June of 2011 really doesn’t even resemble what we called “normal” in June of 2010, and we’re still trying to get comfortable in our new circumstances.

That’s not to say everything was bad, we have much to be thankful for, and God has worked in some pretty awesome ways through it all.  But when so much goes wrong, it’s easy to find myself dwelling on the negative.  More than once I have caught myself complaining, going on and on about everything that’s wrong, and all the things people have done to hurt me, my kids, or whoever else gets in their way.  And, since I’m not good with confrontation, I have become the master of the sarcastic tweet and the passive-aggressive status update on facebook.

While there’s nothing inherently wrong with voicing my opinion, the fact is most of the time it doesn’t prove anything.  Oh sure, there’s the rare occasion when it might lead to something positive, but more often than not it just stirs the pot and fans the flames. Then I usually end up feeling guilty for saying it and wishing I had kept my mouth shut.

Funny thing is, I have never felt that way for saying something positive.  And, as much as it kills me when the people who have offended me go on about their life without acknowledging what they’ve done, I’ve never ended up regretting just keeping my mouth shut.  Sometimes silence really is golden, and our moms were right when they said, “If you can’t say something good, don’t say anything at all.”

Of course, when I’m angry or feeling low, and the perfect snide remark enters my head, I’m clicking on that status update so fast my brain doesn’t have time to recall such sound advice.  Hence the wallpaper.  Now it’s staring me in the face every time I click that button to unlock my phone. I am forced to think before I “speak”, and most times I end up not saying anything.

I’d like to think I’ve always had more positive things than negative to say, so let’s not talk about the obvious decline in my online activity since I’ve had this little ephiphany.  Ok? Ok. That’s right, just smile and nod.

And before you give me your real opinion on that, scroll up and read the quote again. 😉

1 Response to Don’t Say It