My dad has never been a sports fan. Normally, a girl wouldn’t stand much of a chance of becoming a lover of sports with a dad who’d rather be watching PBS or listening to classical music. But my mama raised me right, and I grew up loving most every sport we could watch. We collected baseball cards together, watched football every Saturday and Sunday, and, of course, never missed a final round of any golf tournament on Sunday afternoon.

I’m not sure how many kids have a favorite golfer, but thanks to mom, I did. That golfer was Payne Stewart. If you’re not familiar with him, you’re probably familiar with his outfits.

(Lord knows I tried to find a photo credit and came up with zilch. Forgive me.)

I knew years before I was even married that I was going to name a kiddo after him. And when he was killed in a tragic plane crash, I knew there’d be no talking me out of it. Fast forward to 2004, Declan came along and we chose Payne as his middle name. I was happy.

Fast forward, again, to 2011. This year, Dex was in Kindergarten. One of the many things on his report card was whether or not he knew his full name. Each time his report card came home, that blank was not marked. I knew he knew his name, so I finally asked him about it one day.

His response? “Declan (Last Name).” And no matter how many times I asked, he refused to tell me his middle name. I told him he needed to tell his teacher, Mrs. Judy, so she could mark it on his report card, but he didn’t care. When I finally said it myself he said, “No it’s not. I hate that name. It’s stupid, and I’m not telling Ms. Judy!”

Turns out someone lovingly called him “Declan Payne-in-my-booty” one too many times. Who knew?

I tried explaining who he was named after and why it was such a special name to me, but he wasn’t having any of it, so we dropped the subject for a few months. Then one half-second clip at the end of this year’s U.S. Open changed everything. Dex caught a glimpse of Payne Stewart in that famous celebratory fist pump after his 1999 U.S. Open win. I looked at him and said, “That was him, Dex!! That’s the one you’re named after!” And for the first time, I saw his eyes light up with excitement. We had to rewind it many times just so he could see that clip over and over again. I was so relieved! (I may not be mother of the year, but I didn’t exactly want my kid hating his name his whole life.)

Aside from sports, one of my other obsessions is photography. I have become unreasonably fascinated with photographing graffiti on the trains that pass through our little town, so every time I see a train I start scanning it for artwork. Just a couple of days after Declan’s change of heart, we were leaving another town about 15 miles from home. It was pretty boring, not much graffiti at all, but I could see one car up ahead with something really colorful on it. My boys have joined me in my obsession, so I told them to be watching as it approached. When we finally pulled even with the car, I squinted to try to make sense of what it said. It finally registered for me, and I couldn’t believe my eyes. 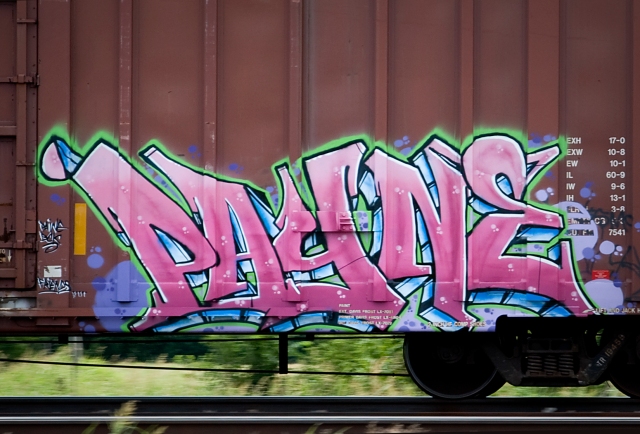 Dex was ecstatic! And here I was, driving down the highway, with no camera in the car. So I did what any reasonable person would do. I raced the train home, ran in the house to get my camera, flew back out to the highway and waited for the photo op.

Call me crazy, and maybe I am, but now that little guy who hated his name 4 months ago, can’t wait to have it hanging on his bedroom wall.

3 Responses to The Payne Train