Counting Your Cupcakes Before They Hatch

It’s no secret that I’m a bit of a cake fanatic. But truth be told, I’m not that big a fan of the baking part, or even the icing part. I’m really just a fan of sculpting little things out of fondant. I’m especially fond of making tiny critters for cupcakes, so when it comes time for class parties, baby showers, etc., I get a little excited. These baby chicks were my latest project. I made them for a spring party at school, but I think they’d be adorable for Easter or even a baby shower, so I thought I’d share the process with you. (You’ll have to excuse the cell phone photography along the way, because I never thought anyone would see them.)

I purchased a big bag of the smallest size plastic eggs from a craft store to use as a form to dry my eggshells. I separated the halves and coated them with a thin layer of vegetable shortening before I started rolling out my gumpaste. Normally, I really dislike working with pure gumpaste, but I wanted the eggshells to be as thin and realistic as possible, so for this purpose it was the best way to go.

I rolled it until I could see the lines in my mat through it, and draped it over one half of the plastic egg.

Covering tiny round things isn’t the easiest thing to do, but fortunately it doesn’t have to be perfect in this case. I trimmed the edges off with a knife so I could handle the egg a little more easily. I really wanted a realistic “broken” edge, so I used a small maple leaf cutter and simply rolled it around the edge of the gumpaste while it was still on the plastic egg and sat the whole thing aside to dry.

Once the shells were completely dry (I let them dry overnight), a gentle twist popped them right off of the plastic eggs.

Now I just needed some chickens to hatch out of those eggs! I made the chickens out of fondant, in the event some 2nd grader should attempt to eat them. (And, of course, they did.) I needed to be sure they’d fit in the egg shells I had already made, so as I rolled each little ball into a general chicken shape, I rested them in the bottom half of the plastic eggs to dry.

Guess what? Plastic eggs don’t stand up very well with fondant chickens in them. So I had to come up with a creative way to dry them. I didn’t have any rice or beans to nestle them into, so they ended up drying in a cake pan full of Grape Nuts.

To finish off the chicks, I simply rolled small beaks from orange fondant, and used a black food writer to give them some eyes. None of them turned out alike, they were different shapes, different sizes, with different faces, but it gave them some character. I put them each in their eggs and rested the top half of the shell on their heads.

Now all that was left was to bake some cupcakes for the little guys to sit on. I didn’t want the icing to take away from the chicks, so I topped them with a simple pale green swirl. It’s quick and it’s pretty, which is exactly what you want when you need to make a whole army of chicks. 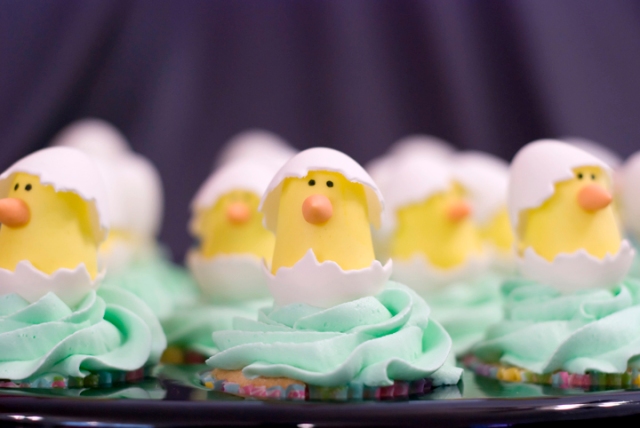 They were a big hit with the kiddos and grown-ups alike. I hope you’ll give them a try sometime. Happy baking!

4 Responses to Counting Your Cupcakes Before They Hatch