We were sitting in Eskimo Joe’s one afternoon when we noticed the wait staff moving tables and chairs around, preparing to seat a large group. It’s not an unusual occurrence, there’s always a group of high school kids, a bus full of band members, a team of baseball players, or a whole crew of Special Olympics athletes and their families. Eskimo Joe’s is the place to go when you’re visiting Stillwater, so we didn’t think anything of it.

Until we saw the group, that is. 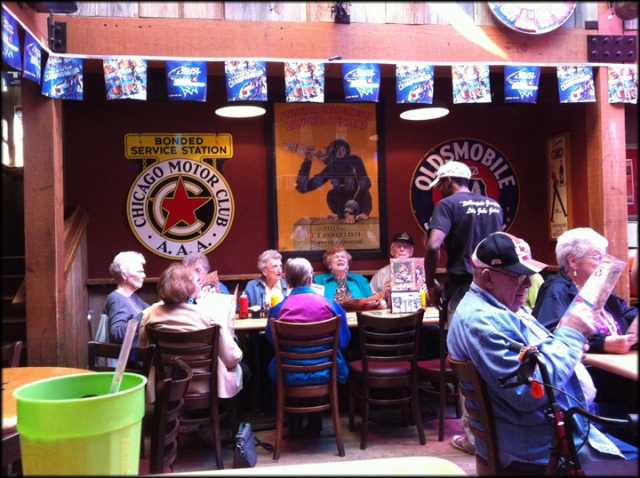 By the time they were all seated, there was a group of about 30+ Seniors. Definitely not your typical Eskimo Joe’s group. It made me chuckle because my dad, who is younger than everyone at those tables, doesn’t like Joe’s because he doesn’t like the atmosphere and the noise. I’m pretty sure we won’t catch him eating there in another 15-20 years. His attitude about the place is probably closer to what would be expected from a group like the one in the picture.

But that word…”expected”…sometimes I hate it. Who decides what’s “expected” of us, anyway? Maybe those folks should be at some dinner buffet at 4pm for the early bird special instead of hanging out at Joe’s and ordering cheese fries. That’s what’s expected of them. But why? Because they’ve had a certain number of birthdays?  It sounds silly when you say it out loud, but isn’t that the only difference between me and them? I love the lady in the middle of the picture, head tilted back, fully involved in the heartiest belly laugh. They are obviously having a lot of fun, doing something so unexpected. A lot more fun than the early bird special at the local cafeteria. Fun they’d miss out on if they worried about doing what others “expected” of them.

Why? Why not go to the college you prefer and study what you’ve always wanted to study? Why not forego college altogether, if that’s not what you were cut out for? Why not start your own business, or be a full-time artist and opt for personal fulfillment over that regular paycheck? Why not stay single and travel the world, or pursue that career you’ve always dreamed about? Why not choose to not have any kids at all?

Because, oh the horror, we might disappoint someone. Forget our own happiness. Forget the fact we’d be more fulfilled and more accomplished if we were pursuing the life we were passionate about. The ultimate goal is to do, and become, what is “expected” of us, no matter how miserable we may be. There’s no risk involved there. There’s no chance that we fail in our pursuit of our own dream and have to face the people who told us to stick with what was expected. Sure, there’s a certain security in having the safe degree, the normal job, and the textbook family. But is that really living? How much more could you achieve, what kind of a difference could you make in the world, if you stepped out of the box and went after the unexpected?

I’ve always strived for what was expected of me. I haven’t achieved most of it, and even though it wasn’t what I may have wanted for myself in the first place, I feel like I have failed because I haven’t met those goals. I’m ready to let it go and start trying to live up to my own expectations. The irony is, your expectations of yourself are usually much higher than those of others, and you’ll find yourself exceeding what others expected of you anyway.

Start really evaluating what you’re doing, and your motivations behind it. Are you doing it because it’s what’s expected of you? Or are you doing it because it’s what you really want for yourself and it’s the best thing for you and those who depend on you? I think I know how most of you will answer that. So start doing whatever it takes to make the unexpected happen, start taking the necessary risks to live the life that is right for you instead of everyone else.  Start today. I’ll meet you at Joe’s in 40 years and you can tell me all about it.

2 Responses to Cheese Fries vs. The Early Bird Special