A Promise Out Of Context

Repeat alert! Today’s post is another of my posts from Testify. I think for most of you, it will be the first time you are reading it. If not, it’s something we all need to be reminded of from time to time. 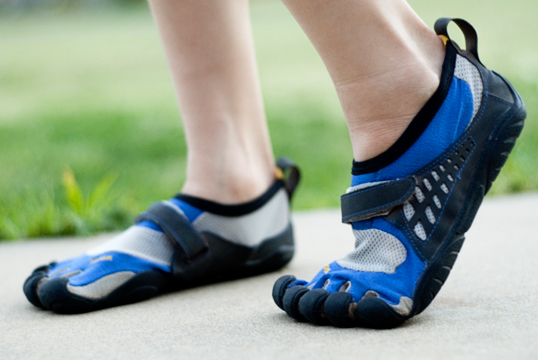 When you’re 8 years old, there are few things more exciting than getting a new pair of shoes.  I remember being so anxious to get home from the shoe store so I could rip them out of the box and take them for a test run.  I’d make the whole family stand there and watch as I raced across the yard, certain that I was flying faster than ever before.

Now, I have an 8-year-old son of my own, and this weekend we bought him a new pair of shoes.  They aren’t just any old pair of tennis shoes, they are Vibram Fivefingers.  A “goofy looking pair of shoes,” as The Canadian puts it, that have holes for your toes just like a glove has for fingers.  The idea is that they mimic going barefoot while protecting your foot the way a normal shoe would.  They are certainly different, and they come with a lot of claims about their “barefoot technology”.  My 8-year-old is one for reading every detail about anything he comes across, and he latched onto those claims, just as he does with every informercial he sees.  He was excited, so I wasn’t about to burst his bubble.

The problem came when he went to school and began telling his friends about all the amazing things his shoes could do.  He got more excited and his stories got bigger, until he had convinced himself those shoes would make him run faster.  Inevitably, one of his friends finally told him, “You’re just as slow as you were yesterday.”  He was angry and frustrated when he got home, insisting that the shoe box said those shoes would make him faster.  It was a claim which, of course, the good people at Vibram never made, but he had convinced himself that it was real and he was expecting the shoes to live up to that expectation.

You can chalk it up to him being a child, but the truth is, there is a nonexistent claim that I hear adults make all the time.  Adult Christians are the worst offenders, and if you look hard enough on twitter or Facebook you’ll find at least one example of it daily.  It’s my biggest pet peeve, and I cringe every single time I hear someone say it.  The claim?  “Just remember, God will never give you more than you can handle.”

It’s the go-to line most people use to comfort someone in the midst of crisis or tragedy, when we have no way to make it better, and we just want to give that person a ray of hope.  The intentions are good, but as great as it sounds, that is a promise God just never made.

It most likely stems from the promise He give us in I Corinthians 10:13 where it says, “No temptation has seized you except what is common to man. And God is faithful; he will not let you be tempted beyond what you can bear. But when you are tempted, he will also provide a way out so that you can stand up under it.”  But we have taken that promise out of context and changed it in such a way that it provides false hope.

The truth is, God will absolutely give us more than we can bear.  We have a tendency to think we can handle life on our own, and there will be times when God allows the trials to pile up until we are forced to admit we’re in over our heads and hand it all over to him, to lean on him and let him carry our burden while he brings us through it.  By telling people anything else, we are causing them to expect something from Christ that He just never claimed He’d do, much like my son expected those shoes to live up to a claim their creators never made.  We’re setting them up for anger and frustration with the one source that can provide them peace and comfort.

We are all probably guilty of using that line at some point in our lives, but the best thing we can tell someone in pain is the truth.  While it may not be pleasant to hear that things might, in fact, get worse before they get better, teaching someone to lean on the Lord while they go through the worst of it is the greatest gift we can give.

1 Response to A Promise Out Of Context