I Brake for Giant Wieners

One of the greatest things about being a child is the excitement. Excitement over everything. Something as simple as a trip to the zoo or having your very own banana split can be exciting enough to make you grin for a week. But somewhere along the way, as the years pass, our excitement gives way to practical reasoning, and instead of just enjoying things as they come, we worry about what they cost, or how much time they’ll take out of our day. There just aren’t that many things that we can just cut loose and get excited about.

But every once in a while, one of those rare things come along that just instantly sends that spark of childlike giddiness straight through us. It happened to me as I was driving into another town a few weeks ago. I looked up at the Interstate paralleling the road I was on, and what did I see? None other than the infamous Oscar Mayer Wienermobile. I reverted back to childhood almost faster than I could process what I was seeing. I literally squealed as I realized it was taking the exit and I’d be waiting at the stop sign when it got there. As it passed by, I did what any reasonable adult would do.

I stalked that weiner all the way around the gas pumps and through the Love’s parking lot until it finally came to a stop at the Arby’s next door. I pulled up beside it and took a quick picture with my phone, trying to be discreet about it so no one would see me before I could drive away.

Then as I pulled out of the parking lot, I went back into mommy mode and realized I hadn’t even gotten a picture of my kids with the Wienermobile. I couldn’t stand it, so I reluctantly pulled back in, feeling like an idiot. But when I circled the store, it was clear I wasn’t alone.

There wasn’t a kid in sight, but there were adults coming out of their cars all over the parking lot, all armed with cameras and cell phones. I grabbed my phone and told the boys to get out of the car. They complained, they didn’t know what the heck it was, (Roenick asked if it was Anthony Weiner’s hideout)…I didn’t care, they were having their picture made whether they liked it or not. I was sure they’d thank me later, at least that’s what I told myself. I gave them instructions on where to stand and they went into awkward posing mode while I snapped pictures as fast as my phone would let me.

I did finally get one with just them and the giant wiener, awkward poses and all, but this one is my favorite because it really says it all. 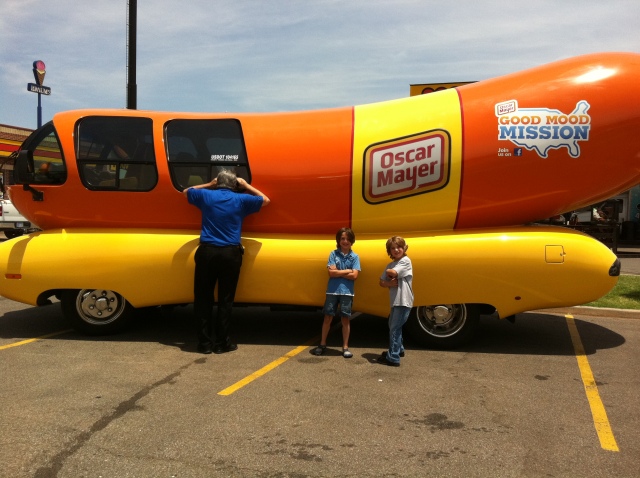 It’s not often you see a grown man excited enough to be pressing his face against a window just to get a glimpse of something, (I totally refrained from saying “someone else’s wiener”…oh wait), completely disregarding what anyone around him may think.

As I walked back to my car, the smile still plastered on my face, I watched the other folks in the parking lot texting and calling everyone they could reach, grinning and laughing as they relayed what they were seeing. I sat down in the car to look at my pictures and post them on twitter and facebook, of course, only to see one update after another pop up from people who were all so excited to see that massive hotdog on wheels. The whole scene was so full of this childlike excitement, I wanted to press pause and live in it for a while.

Then Roenick, an 8-year-old, says, “Wow, Mom, I don’t think I’ve ever seen you get that excited before!” Really? In his 8 years of life he has never seen me as excited as I was about a silly car? That really struck me, and I decided right then and there that I spend too much time being a grown-up, and not enough time allowing myself to be a kid again. I don’t think any of us do.

So take this as a challenge, to let your guard down more often, to let yourself cut loose and enjoy…I mean really, really enjoy…the life playing out around you, no matter how silly you may look while you’re doing it. I double dog dare you. I promise you won’t regret it.

5 Responses to I Brake for Giant Wieners